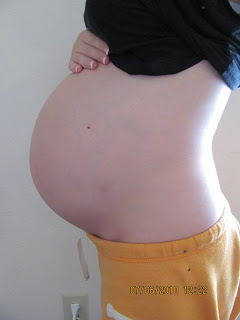 So I made it… 36 weeks. The past couple weeks have been crazy that’s for sure.
I went into the hospital on (Sunday) June 20th because of my crazy right foot being extra swollen. My Dr. wanted to make sure it wasn’t a clot or preeclampsia. Both checked out perfectly clear. I got checked just in case and we found out I was 40% effaced, almost 1cm dilated and Kendall was -2 station.
Then that Friday I had some major contractions that we timed for about a hour and they were getting really close at that point then spaced out so we didn’t end up going to the hospital.
On Tuesday was my appointment I asked to be checked just to see if the contractions on Friday did anything. After hesitation my Dr. finally checked me and I was 50% effaced, still -2 but now 2cm dilated! Ever since Friday I’ve been having constant contractions. Some get really close, most are about 10 minutes apart.

Saturday (the 3rd) horrible contractions started around 3pm. Finally at 6pm I called my Dr and she said to head to the hospital because they had been about 4-5minutes apart, and killing me! After being monitored for over an hour my contractions started to finally space out to 9minutes. Since baby was fine, my BP was fine, and the contractions hadn’t really changed anything in my progression, I was sent home.

It’s been hell every single day since then because the contractions have not stopped and I cannot sleep what so ever.
I’m glad we made it to 36 weeks but it sucks so bad that my body is really trying to get baby K out of her cozy home.
Everyone has been telling me it’s because this isn’t my 1st baby, so I’m thinning and dilating because of that but that it doesn’t necessarily mean she will come sooner. I would love to believe that but because I delivered Makenna so quickly (I was 41 weeks though…) I’m just nervous that it will be any second, any day now.

What has been a little more annoying is that people think I WANT her to come out right now. Of course I dont WISH she would come 4 weeks early and have to stay in the NICU for a couple days. Who actually would wish that upon their newborn!? On the other hand though, I’m allowed to voice my frustration and say that “she needs to come out already!” since these contractions are killing me most of the time. I am going to call my doctor and see if they can stop them because I’m barely able to function 98% of the time. So when I say, ‘My Dr. either needs to stop these contractions or get Kendall out already’… again, that doesn’t mean I’m voting for her to come out!

Anyway, these next 4 weeks are going to be hard but Kendall needs to stay in her cozy oven, just cookin’ away! So hopefully I have 4 more blog posts about my weekly updates to come.