You are here: Home / family / A crazy preggo mess
0shares

So it was a VERY sad day 2 days ago. We decided to take our beloved cats back to the SPCA.

Last year our kitten, Kitty Kitty a.k.a. Oscar died after he was only about a week old. So the same day John took us down to “look at other dogs but then on our way out he wanted to just go check out the other cats. John saw these two kittens that were only a couple months old and we both instantly fell in love with them. They were brothers that got turned in just days before. The problem… John is highly allergic to cats! Why would someone that’s allergic want a cat? Well because he loves me very much and he knew I was upset over Kitty Kitty’s death.So we adopted our new furry brothers and there began my love! ♥
We’ve always struggled with John’s allergies and it’s been a hard battle but we’ve dealt with it.

Lately it’s just become too much. Maybe his allergies are becoming worse but they were shedding WAYYYY too much, so that’s probably a huge cause of it.
I vacuum multiple times a day, everyday but the house was literally becoming a huge fur ball no matter what we did. I tried switching cat shampoo & giving them more baths then normal but like I said, nothing was helping.
Even if I washed our clothes they would still come out of the wash with orange fur all over them! So it’s hard enough having the fur everywhere but when my allergic husband has to wear clothes that have fur on them & a lint roller doesn’t really help… that creates a problem.

Also, John has had concerns with having them around Kendall. He isn’t sure how they will react and just doesn’t want her and her stuff covered in hair as well. Although I continue to tell him she isn’t going to be the first newborn around cats, he still has his right to be concerned over his daughter, ya know.
I suppose I understand the reasons but that doesn’t help anything.

Phoenix was my hyper baby. He would sleep on my bottom pillow since I always have half of it sticking out from under the top one. So I’d fall asleep feeling/hearing him purr while having my hand on him.

Tiger ALWAYS slept with Makenna. He loved her sooo much. At bed time he would practically lay on top of her head since he also slept on her pillows. I would find him curled up with his paw on her head and her hair covering his head since he buried it under there.

They truly were the best kitties and this has been one of the hardest decisions I’ve had to make in a long time.
I am a high believer that pets are in no way shape or form disposable and when you adopt one it’s for life. But if you understood the severity of our situation (because yes… there is a little bit more to my story) then you would understand that my hands were tied.

Thank GOD the SPCA does not euthanize animals due to the length of time they are in the shelter & they will never transfer them to another shelter so I do know they will be safe and be healthy until someone else can adopt them.

But now for the past 2 days I have not been able to fall asleep until about 3-3:30 because I’m so used to our nightly ritual. Now that he’s not here I’m pretty positive that Phoenix’s purring always put me to sleep, plus having my hand on his soft fur was a comfort thing. So now at night is when I begin to cry more about them.

Today I think we’re going to go down to the SPCA and see if they are still there. On the other hand I don’t want to and know I shouldn’t because it’s just going to kill me more to see my babies all caged up. And then if one has been adopted but not the other… omg, I will not be able to see them separated like that. We adopted them together because they are brothers and I want someone else to adopt them together as well.

I know this is not just pregnancy hormones getting to me. I truly miss them and I want them back so bad.  🙁

Phoenix and Tiger sleeping in their bed. All squished up, lol. 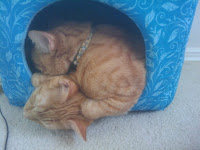 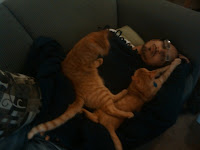 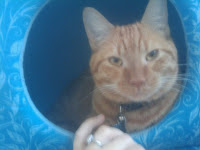 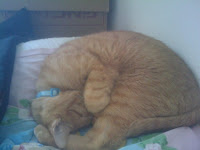