You are here: Home / Uncategorized / My Worries
0shares

So it’s been 2 weeks tomorrow that I’ve been on Zoloft. I’m still not quite sure what to think about it. Some days I think it helps and other days, like yesterday, I think it does nothing at all and I question if I even took my pill the night before.

The first few days I debated to stop taking it because a couple nights in a row I would lay in bed and I would start to have an out of body experience or something. It literally felt like I was floating above my own self. Another night, John & I were cuddling in bed and he had his hand over mine and all of a sudden I felt like my hand was so tiny, like an ants, and he was just smothering me or something.

On top of dealing with my own PPD issues, Kendall has been having some horrible reflux. Her ped suggested we try some rice cereal in her milk but at 2 weeks old? C’mon. Then last week she said, it sounds like Kendall is lactose intolerant and to put her on Soy formula. John & I both expressed how we really want her to have my milk and formula wasn’t something we wanted to do, and she simply responded by saying, it’s the baby’s choice, not ours! lol.
She gave us a sample of Similac Isomil Advanced Soy Formula. It took me a couple days but I finally gave in and gave it to her. Of course the reflux didn’t stop and now dealing with his problem for 3 1/2 week both John & I had had enough. We just want our baby girl to feel better and not hurt and cry all the time.

After talking to all you Twitter moms and doing my own online research I become extremely angry with the pediatrician and have since switched to a new Dr. for Kendall.

I’ve put her back on breast milk but now for 2 days I’ve been dairy and caffeine free. My milk production has definitely taken a hit from me not pumping for those 2 days she was on formula but its slowly starting to climb back up. I went from 12+oz a side to about 2-3oz. So it’s definitely depressing to say the least but I know my body can produce the much needed milk for Kendall.

So now what to do with the approx. 235oz of milk I have stocked up in the freezer? 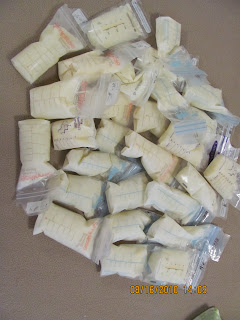 Well I found a local place called Get PUMPed! I already put in my application so hopefully I get approved soon and I can help a much needed mom & baby out in the Orlando area!